This guideline is intended for all healthcare professionals caring for cardiac children within the Paediatric Intensive Care Unit at the Royal Hospital for Children, Glasgow.

All medical and nursing staff caring for cardiac patients should be familiar with the protocol.

Junctional ectopic tachycardia (JET) (also known as usual complex VT or His bundle tachycardia) is the most common troublesomepostoperative tachyarrhythmia in children, occurring in 5-10% of post-operative cardiac patients, and can be a cause of significant morbidity and mortality in the PICU.  It has a higher incidence in infants < 6 months. It is thought to be caused by trauma or oedema around the bundle of His, but is not necessarily related to surgery near the His bundle. It has been documented after all types of cardiac surgery, including extracardiac procedures such as Extra cardiac Fontan and Blalock Taussig shunt.

JET is a self-limiting tachyarrhythmia, typically occurring within 72 hours of cardiac surgery and resolving within 8 days.  It is an incessant tachycardia, often with AV dyssynchrony, that results in the detrimental combination of an increased myocardial workload and oxygen consumption in the presence of a reduced myocardial oxygen supply. The global cardiac output may be reduced as a result of the impaired ventricular filling that arises due to the loss of the atrial systolic contribution and the shortened time for diastolic filling consequent upon the tachycardia. This can rapidly result in a life threatening low cardiac output state (LCOS), especially if the patient was previously haemodynamically compromised.

JET behaves like an automatic tachycardia so typically does not cardiovert in response to DC shock, adenosine or overdrive pacing. Treatment is therefore aimed at rate reduction and restoration of AV synchrony by pacing. A fall in heart rate will reduce myocardial oxygen demand while simultaneously improve myocardial oxygen delivery. Basic principles of management include adequate analgesia and sedation,  correction of any electrolyte imbalance and reduction of inotropes if possible. The most effective treatment for reducing the rate of JET is a combination of modest hypothermia and IV amiodarone. Once the rate has been reduced, AV synchrony can be achieved by pacing at a rate faster than the rate of the tachyarrhythmia.  ECLS is reserved for life threatening JET resistant to hypothermia and IV amiodarone.

The recognition and diagnosis of JET from the ECG monitor can be difficult.  All patients suspected of having JET should have a 12-lead ECG and an atrial wire study if external pacing wires are in situ (See CIS guideline for advice on how to perform atrial wire study).

Common cardiac lesions associated with the development of JET

Peri-operative risk factors in the development of JET

Atrial wire study: This rhythm strip demonstrates the faster ventricular complexes dissociated from the A ‘spikes’ to give the appearance of the regular A spikes ‘walking through’ the QRS complexes. 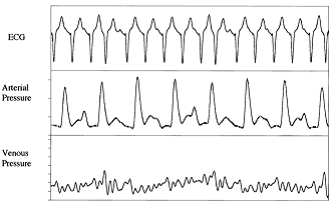 Various treatment options exist for JET but there is no consensus on the best regimen. Treatment is aimed at slowing the ‘JET driven’ heart rate. However, strategies that reduce the JET rate may also reduce the rate of depolarisation of the sinus node, such that restoration of AV synchrony may not be re-established. Reduction in the tachycardia alone can be beneficial as it reduces myocardial workload, but may also allow pacing to restore AV synchrony. Markers of a low cardiac output state - a widening difference between the arterial and venous oxygen saturation, a widening of the central/peripheral temperature difference, and markers of end organ dysfunction (increasing acidosis, lactate) - should be continually monitored.

Analgesia and sedation should be considered to minimise global oxygen demand, although judicial use may potentially reduce cardiac output. Despite the tachycardia being driven by a non-physiological ectopic focus, optimising analgesia/sedation will reduce endogenous catecholamine production which in turn will reduce any additional influence that the chronotropic effects may superimpose upon the JET rate. Muscle relaxation should be considered as an adjunct, especially if the desired degree of hypothermia is suspected to induce shivering (see below).

Optimisation of electrolytes and fluids

Hypomagnesaemia, hypokalaemia and hypocalcaemia have been linked with the perioperative onset of JET. (Cardiopulmonary bypass is associated with decreased magnesium levels). Magnesium should be maintained >1.5mmol/L, potassium >4.0mmol/L and ionised calcium >1.2mmol/L.  Acidosis and hypovolaemia may contribute to JET although correction with bicarbonate/increased ventilation, or fluid supplementation respectively is not without side effects. Bicarbonate can cause a paradoxical intra-cellular acidosis and imparts a CO2 load; increased minute ventilation will induce complex cardiopulmonary interactions and judicious volume supplementation may not be well tolerated by a poorly functioning right ventricle operating at the top of it Starling’s curve/ performance. A red cell transfusion will supplement oxygen carrying capacity.

Modest hypothermia has been shown to reduce the rate of automatic tachycardias such as JET. It also will minimise cellular metabolic activity and may simultaneously reduce endogenous catecholamine release.  Although poorly evidenced, titrated degrees of hypothermia may sequentially reduce the JET rate, although there is no correlation between temperature reduction and rate reduction. Antipyretics should be considered, prior to using ice packs, cooling blankets or bladder/gastric irrigation with cold saline. However, hypothermia will increase the systemic vascular resistance which will increase the myocardial stroke work index and may further compromise cardiac output. Shivering will increase cellular metabolic demand. Hypothermia is associated with impaired immunity, impaired healing, deranged coagulation and increased risk of arrhythmias on re-warming. In view of these potential adverse effects, we recommend three target ranges depending upon clinical effectiveness  (see flow chart)

The use of inotropic drugs postoperatively is associated with an increased risk of JET due to the increase in cardiac systolic wall stress and heart rate, and may be dose dependent. Dopamine, in particular, has been shown to have a direct arrhythmogenic effect. As far as possible, inotropic support should be kept to a minimum in the immediate postoperative period. In the presence of over-vasodilation from an often co-existing ‘systemic inflammatory response’, the cautious introduction of vasoconstriction may permit a reduction of direct inotropic support. However, this is a potentially dangerous strategy as the dramatically detrimental effects of vasoconstriction causing an elevation in systemic vascular resistance and an increased myocardial workload cannot be overstated.

All antiarrhythmic drugs are myocardial suppressants. Although many classes of antiarrhythmic drugs have been used in the treatment of JET, amiodarone is widely felt to be the safest and most effective agent. Its mechanism of action is a prolongation of the duration of the action potential and refractory period of all myocardial cells, and noncompetitive α- and β-adrenergic inhibition (Vaughan Williams’ class III, and may be considered as having calcium channel blocking and β-blocking effects). However, Amiodarone has potentially serious side effects. It is a negative inotrope, with a slow onset of action and a very long half life. It is also associated with arrhythmias - sinus bradycardia or atrio-ventricular block. Excessive amiodarone can lead to profound bradycardia and has resulted in the need for ECLS. Late sinus bradycardia has been documented following the cessation of amiodarone but is usually transient and easily treated with external pacing. Amiodarone may cause hypothyroidism. We have recently reviewed our experience and usage of amiodarone in Yorkhill to recommend a loading dose of 5mg/kg over 1-4 hours, followed by an infusion of 10 micrograms/kg/min (range 5-15 micrograms/kg/min). In view the potential haemodynamic consequences, the risk:benefit ratio of the need for the loading dose, the rate that this is infused, and the maintenance infusion rate should be agreed by the bedside clinical team (see flow chart).

Esmolol is a short acting beta blocker which reduces the rate of JET by increasing AV block. However, beta blockers may reduce systolic function and esmolol is generally only considered in refractory cases of JET. Its consideration should therefore raise concerns about the need for further support such as ECMO.

Restoration of AV synchrony may be achieved by pacing, higher than the JET rate. Even if the JET rate is successfully reduced by following the proposed algorithm, pacing to restore AV synchrony is still recommended as the addition of atrial systole to ventricular filling will augment the cardiac output. Paradoxically, establishing synchrony may reduce myocardial oxygen consumption even though the external pacing rate will be higher than the therapeutically suppressed JET rate. More contentiously, re-establishing A-V synchrony may protect against further degeneration in cardiac rhythm. Atrial pacing alone may be associated with a long PR interval or even Wenckebach due to the effects of trauma, oedema, drugs and hypothermia on the AV node. This problem will be over-come by ‘AV sequential pacing’ (DDD mode) but results in ventricular pacing with ventricular dysynchrony. The best pacing mode must be determined for the individual patient depending on the presence of AV block and the haemodynamics in each mode.

JET can be life threatening and all therapeutic strategies may further compromise cardiac output. ECLS has been successfully used in Yorkhill as an artificial haemodynamic support until resolution of the malignant dysrhythmia.