Chest drains and chest drainage systems are used frequently in the paediatric critical care unit. There are many reasons for chest drain insertion but primarily they are used whenever there are specific conditions that interfere with the normal mechanism of lung expansion and altered intrathoracic pressures.

Pleural chest tubes are inserted to evacuate blood, pus, air and fluid, from the thoracic cavity, to re-establish negative pressure in the intra pleural space and thereby expand the lungs following collapse resulting from surgery or trauma.

Mediastinal chest tubes are placed in the mediastinum following open heart surgery, via a medial sternotomy in order to prevent accumulation of blood and clots around the heart, which could cause cardiac tamponade – a life threatening situation.

There are many different types of chest drains available including one-way flutter valve drains such as the Heimlich device or portable drains. However, for the majority of patients in the paediatric critical care unit an underwater seal chest drainage system will be used. These systems provide an underwater seal, fluid collection chamber and suction chamber.

In paediatric intensive care it is normally the physician or Advanced Nurse Practitioner who inserts chest drains. However, the bed side nurses’ role is pivotal in ensuring the patient is cared for safely throughout the insertion procedure.

This guideline is intended as a resource for staff involved in caring for children in Paediatric Critical Care 1D (PICU) that require chest drain insertion. The guideline has been constructed after literature search and review of sourced textbooks, national guidelines & recommendations British Thoracic Society, Medline and CINHAL, and external nurse expert peer review and opinion.

This nursing procedural guideline is intended to be followed by nurses involved in caring for the highly dependent or critically ill infant or child requiring underwater seal chest drainage within the Paediatric Critical Care Unit 1D (PICU) at the Royal Hospital for Children, Glasgow.

All nursing staff involved in caring for infants or children requiring underwater seal chest drainage in Paediatric Critical Care (PICU) should be familiar with this nursing procedural guideline. 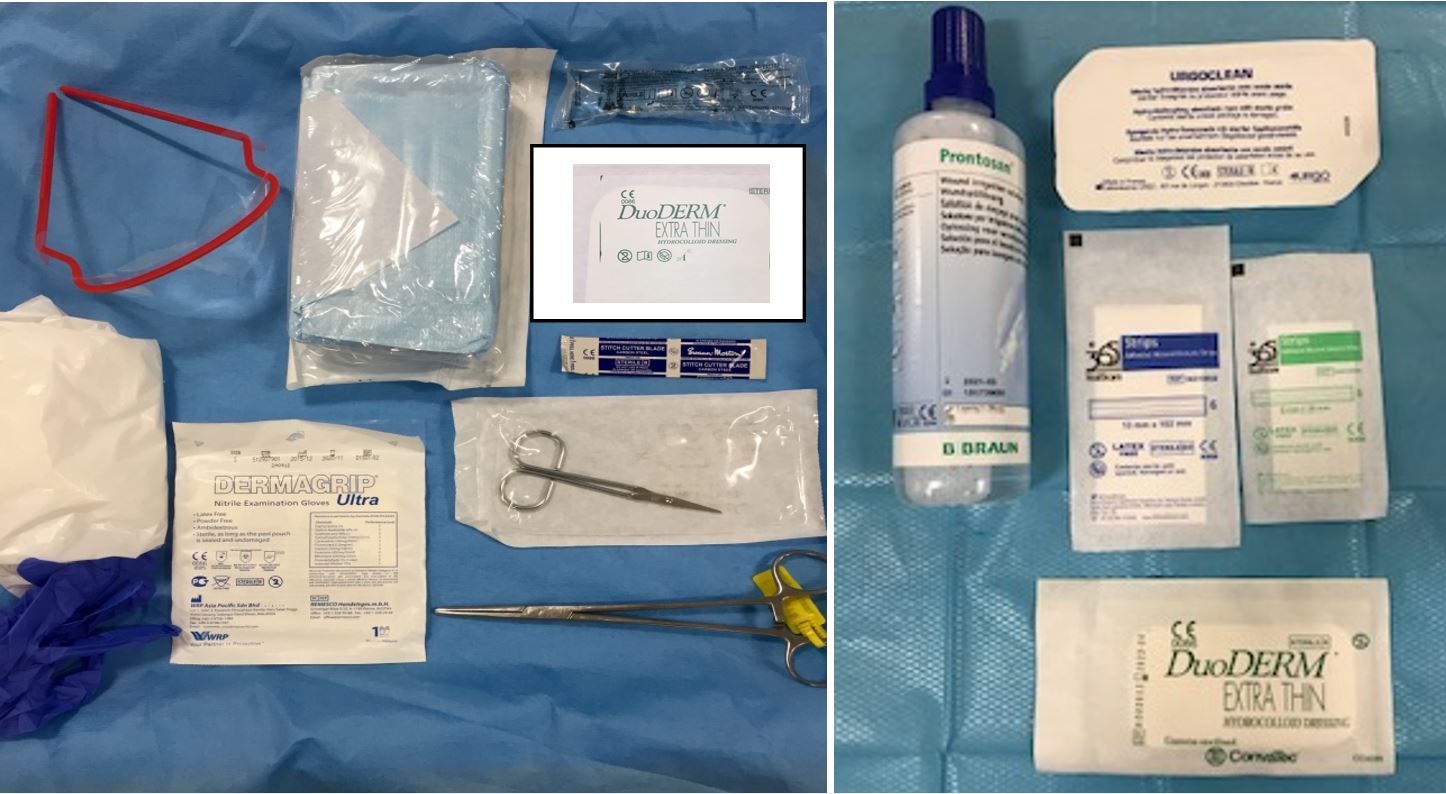 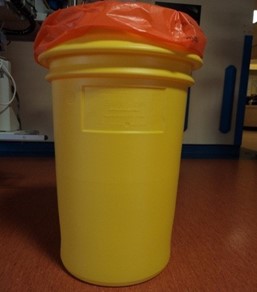 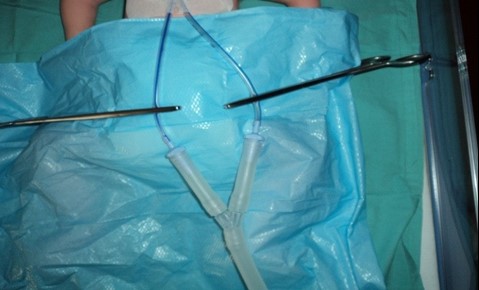 The decision to electively remove any chest drain(s) is a clinical one.

However, the following points should be considered prior to removal:

It should be ascertained that the chest drain is no longer required. That is, the original need for chest drain insertion has been resolved, such as evidence of lung re-expansion or diminished blood/serous loss.

If the chest drain is no longer functioning, that is, it is permanently blocked and unable to drain correctly, then medical staff will advise that it is to be removed. If there is still a need for chest drainage then a new one should be inserted.

The nurse should check the child’s vital signs, particularly their respiratory status. These should be stable before considering removal of chest drains.

The child’s blood results should be checked, in particular haematology and coagulation status should be available, before chest drain removal, as a low platelet count would result in excessive bleeding.

Other clinical evidence of bleeding in the child, such as oozing at invasive line or wound sites, should be noted as this may indicate clotting problems and result in excessive bleeding if drain removed.

If the child is receiving any anticoagulant or thrombolytic therapy then they are at greater risk of bleeding if the chest drain(s) is removed. Protocols for pausing therapy briefly for procedures such as chest drain removal, should be adhered to.

If any of these are evident it should documented and reported to the nurse-in-charge and medical staff so that they may make an informed decision about whether to remove any drains.

Sometimes omentum may come out with the chest drain being removed. If this does happen, pause procedures, clean site and apply dressing and inform medical staff immediately (see Note above)

Occasionally the chest drain wound site may not have a wound closing suture (E.g. drain insrted as emergency by transport team prior to admission). In this instance, when removing drain ensure application of sufficient steristrips, occlusive dressing and document (See *above) 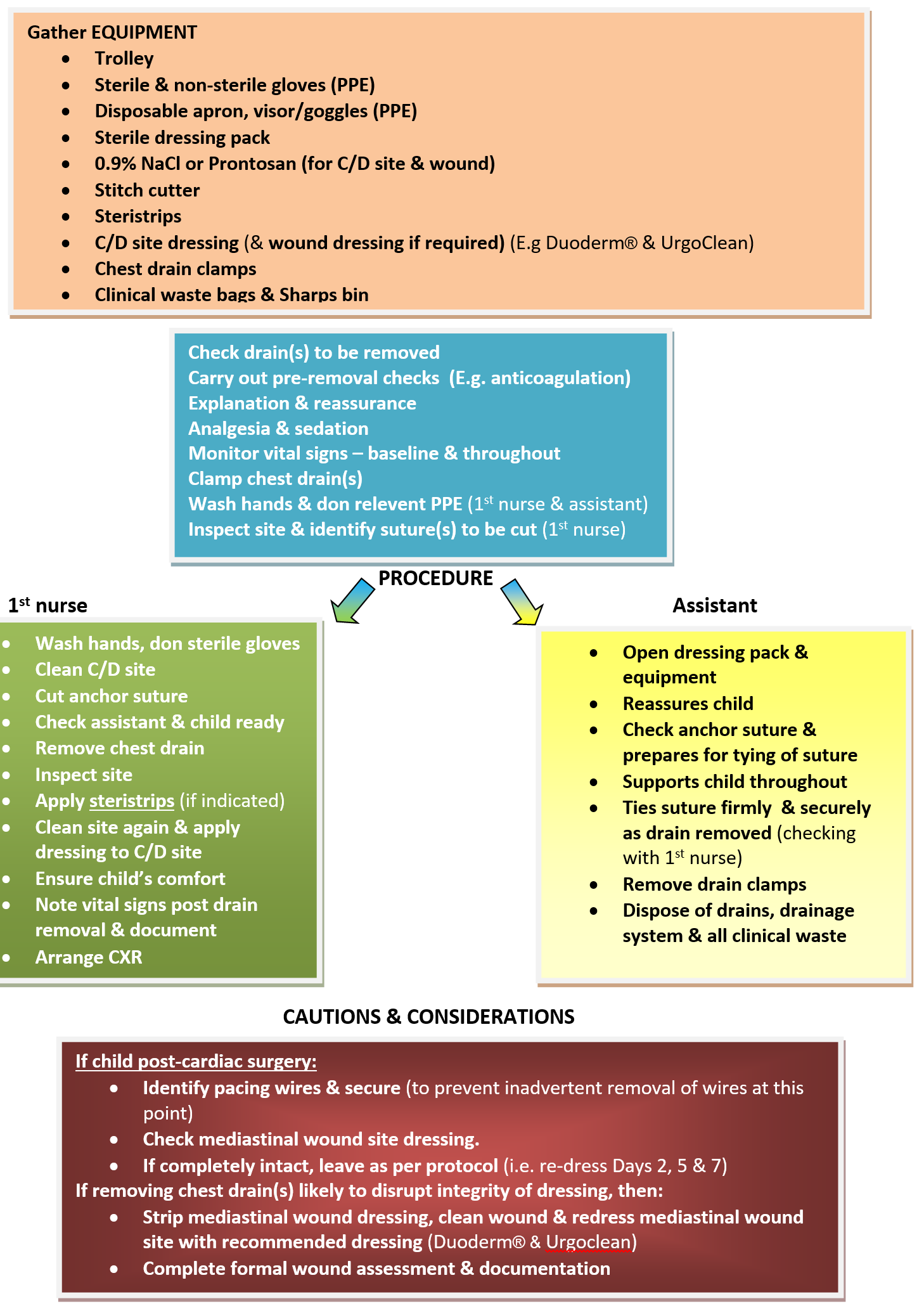