This guideline is applicable to all levels of nursing, midwifery and medical staff caring for neonates and infants in the West of Scotland.  The purpose of this document is to guide staff in the prevention, early detection and management of extravasation injuries in the neonatal/ infant population.  Staff must follow relevant guidelines: for aseptic techniques for procedures; for the insertion of Intravenous Cannulae (IVC); and the administration of Intravenous fluids and medicines. Staff caring for babies with peripheral venous cannulae should also utilize Peripheral Venous Cannulae (PVC) care bundles.  Staff giving medications via peripheral venous cannulae should also follow the advice contained within the pharmacy drug monographs

Infiltration refers to the inadvertent administration of fluids or medications leak into the surrounding tissue instead of the intended vascular pathway.

Extravasation refers to the leakage of fluids or medications from a blood vessel leak into the surrounding tissues.  This may occur secondary to occlusion of the vessel in which the cannulae is placed due to thrombophlebitis

Extravasation injury occurs when extravasated fluid causes injury to the surrounding tissues.  This may occur more frequently when the fluid has an extreme pH (very acidic / alkaline), is hypertonic (high osmolality), is irritant, or is vasoactive. It may also occur if the extravasated fluid is confined within a restricted tissue compartment causing pressure on the blood vessels or nerves in the adjacent tissues (compartment syndrome)

Many babies, who are admitted to the Neonatal Unit and in particular to Neonatal Intensive Care, will require the insertion of an IVC.  An IVC will usually be inserted for one of two reasons:

Although a necessary therapeutic measure, the presence of an IVC is associated with several recognised complications, the most common being:

Due to the increased flexibility of the subcutaneous tissue, damage can occur before extravasation is identified.

If these injuries are not detected and managed promptly and appropriately this can result in pain, infection, loss of function, nerve damage and permanent disfigurement/scarring.  In many cases these injuries can be prevented or minimised by the careful observation and vigilance of the attending healthcare practitioner.

The pharmacological properties of a drug influence its ability to induce tissue damage.  The following section identifies the medications most likely to result in extravasation injury

When vasoconstrictive  medicines are administered peripherally, they may produce local vasoconstriction, leading to blanching of the skin around the infusion site.  This effect may be extensive leading to severe tissue hypoxia and ischaemia of the surrounding tissues.

The following drugs have a high risk of causing tissue damage due to vasoconstriction or vasodilatation and should be given via the central route wherever possible.   (exceptions would be in life- threatening emergency where no central venous access is available – In this case the line site should be checked very frequently e.g. at least every 15 minutes).

Some drugs are formulated with substances such as polyethylene glycol and ethanol (alcohol) to improve their solubility, e.g. nimodipine.  Such injectable medicines are known to be more irritating than those formulated in aqueous solutions.

Irritation due to extreme pH

Drug solutions with a pH <5.5 or pH >8.5 may cause tissue damage if they infiltrate subcutaneous tissue as they disturb the normal cellular environment. Blood and tissue fluid have a pH of 7.4 and deviation from this pH will cause damage to cellular structures, particularly by disturbing the function of proteins. The table below shows examples of medicines that have particularly high or low pH values. The reader should note pH values may vary slightly between different preparations of medicines, according to the manufacturer’s formulation.

All solutions exert an osmotic pressure, dependent on the amount of substance dissolved in the solution. The tonicity of a solution is measured relative to water, which has an osmolarity of 0 mOsmol/L. Solutions with an osmolarity more or less than that of plasma (~290 mOsmol/L) may cause tissue damage. The presence of these solutions can lead to an osmotic imbalance across the cell membrane, leading to the movement of water into or out of the cell, a breakdown of cellular transport mechanisms and cell death. Most injectables are formulated to have the  same osmotic pressure as plasma so that the solution to be injected into the patient is unlikely to cause vein irritation.  The table below lists a selection of medicines that have high osmolarity and may potentially cause a problem if extravasated. Extra care should be taken when administering these medicines .

Few medicines have an osmotic pressure less than plasma; however, if a medicine is made up with greater than the recommended volume of water for injections, the medicine is likely to be hypotonic and may cause tissue irritation. In practice, this tends to be much less of an issue than injection of hypertonic solutions.

Osmolarity or osmolality? What is the difference?

Tonicity is stated using two different conventions: osmolarity is the theoretical tonicity and is derived through calculation. Osmolality is the measured tonicity and is derived through laboratory testing, such as freezing point depression. Both values are usually similar, with some notable exceptions such as calcium gluconate. This has an osmolarity of 670 mOsmol/L and an osmolality of 276 mOsmol/kg. Some medicines may be more irritating to tissues than expected, based on based on their osmolarity.  Where possible the osmolality of a solution is stated in the relevant pharmacy information, as this is a better indicator of whether a medicine will cause tissue damage. If a medicine has an osmolality of greater than 500 mOsmol/kg (or an osmolarity  of greater than 500 mOsmol/L ) it is more likely to cause problems if it infiltrates a tissue. This risk increases with increasing osmolalityabove this value. Solutions with an osmolarity of > 1000 mOsmol/L should never be infused peripherally.

Medicines with a high tonicity may be diluted to a larger volume of infusion fluid in order to reduce the tonicity and thus reduce the irritancy of the medicine.

Where clinically acceptable it is best practice to set infusion in-line pressure alarm settings using the “Auto Set Pressure” feature on the infusion pump. This may be used once a stable pressure has been achieved (over approximately first 10 minutes of infusion) to set pressure 30mmHg above the average in-line pressure allowing for a quicker ‘time to alarm’.

This will alert the healthcare practitioner supporting early clinical assessment and intervention which may assist in reducing the risks of complications. All sudden increases in pressure or increasing pressure trends must be investigated and the infusion line and IVC site examined carefully.

i. Causes of extravasation and Prevention

N.B. Not all symptoms will be present at each stage

A Cochrane review (Gopalakrishnan et al, 2012) concluded that there was insufficient evidence to examine the effects of irrigation with or without hyaluronidase in the management of extravasation injuries in neonates.  Indeed, if inexpertly performed, irrigation may worsen the injury.  Irrigation would never be considered appropriate for low grade (A-C) extravasations.  If irrigation is deemed to be necessary after clinical assessment of the baby it must be carried out by a suitably experienced Neonatologist or Plastic Surgeon as this can cause the onset of compartment syndrome amongst other complications.

Patient discharged to Primary Care or other health care setting 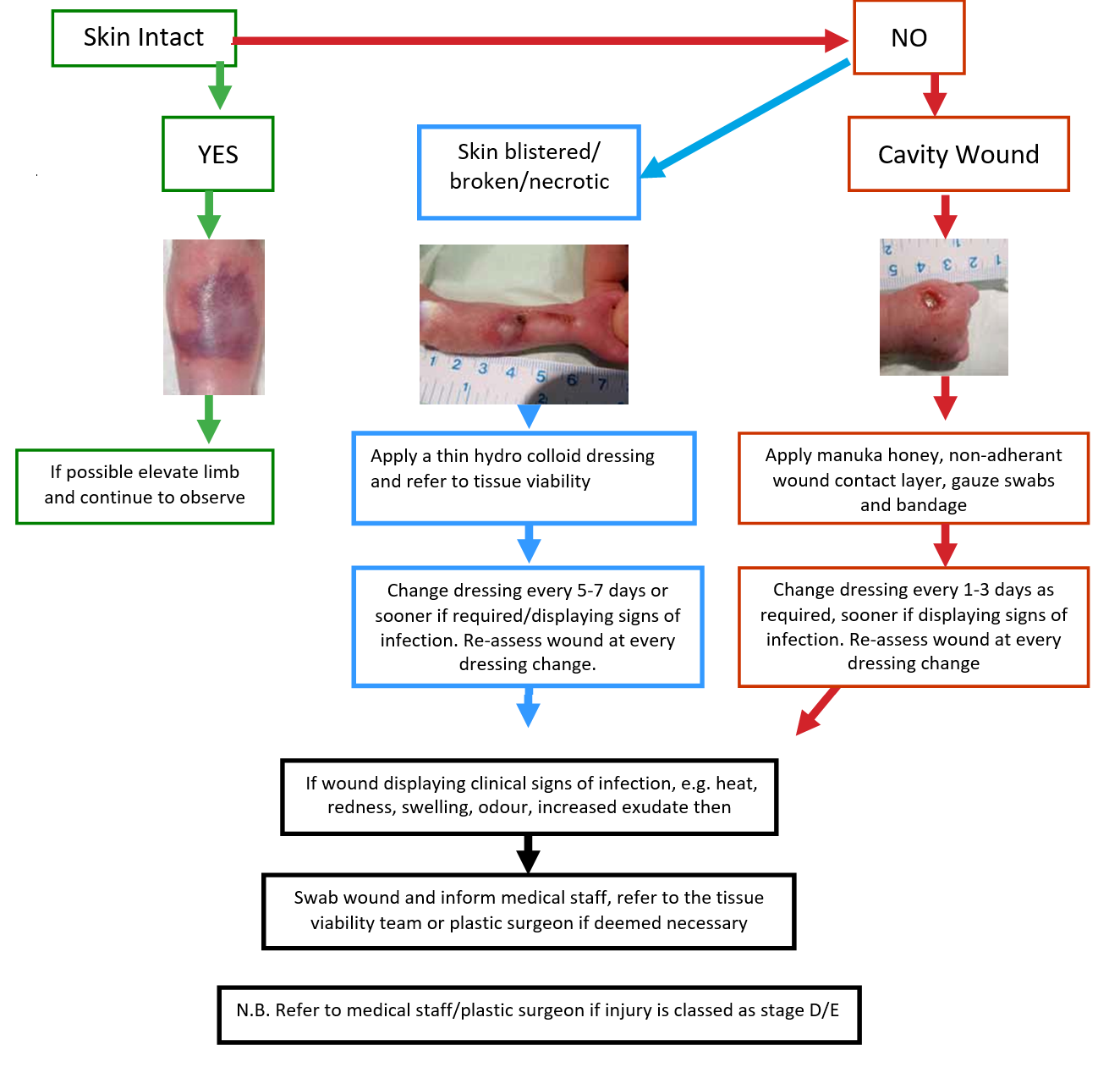