Management advice for patients presenting with the effects of New Psychoactive Substances (NPS) to the Emergency Department. This includes the management of serotonin toxicity and the intoxicated child/adolescent flowchart to aid in discharge management.

Children and adolescents presenting to the Emergency Department after taking an NPS.

Younger people increasingly use these drugs and multiple substances are often taken simultaneously. The chemicals in the drug often differ from the written description and the composition of one product may vary from month to month. This makes the psychoactive and toxicological effects of these drugs highly unpredictable in the short term, with unknown long-term effects. Most have never been tested on humans in a controlled environment therefore our knowledge about these substances is very limited. We are slowly acquiring more information about the toxidromes of certain drugs as patients present to Emergency Departments.

In Scotland in 2013 there were 113 deaths where NPS were present and a 16 year old died in Lankshire in August 2014 after taking an NPS.

The most commonly used groups of NPS in the UK are:

Below is a description of the effects and side effects of the more common NPS in the UK. It is important to remember that the market for these drugs is constantly changing and patients may be unaware or unable to tell you what they have taken. You must therefore treat each toxidrome as you find it (eg; hypotension, arrhythmias, seizures, pyrexia), whilst maintaining a broad differential diagnosis (sepsis may present in a similar manner).

Adverse effects of illicit drups, including NPSs can be reported to the Report Illicit Drug Reactions (RIDR) pilot project. Details are on toxbase.

These chemicals mimic the effects, and are often more potent than, the active component of cannabis (THC).

Method of Ingestion: Usually smoked but can be ingested

Method of Ingestion: Snorted as a powder, ingested in tablet form, ingested as powder wrapped in cigarette paper (‘bombing’), or injected

Management : See Toxbase under specific drug or ‘Amfetamines and other stimulants’ and Serotonin Toxicity

If Hyperthermia refer to Serotoxin Toxicity Guidance below

The primary toxicity of benzodiazepines ins CNS depression. These Benzodiazepinetype NPS may be many times more potent that Diazepam.

Serotonin toxicity is a serious side effect of ingestion of NPS. Features may occur insidiously over a period of hours to minutes and are characterized by altered mental state, neuromuscular hyperactivity and autonomic instability.

In severe toxicity, uncontrolled hyperpyrexia leads to rhabdomyolysis, renal failure, acidosis, hypocalcaemia, hyperkalaemia, DIC and death. It is therefore paramount that it is diagnosed and treated early. 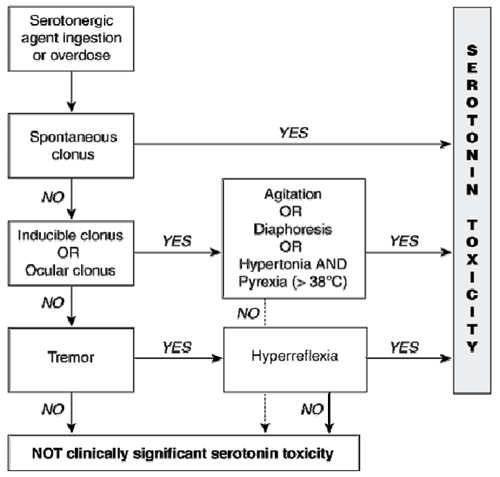 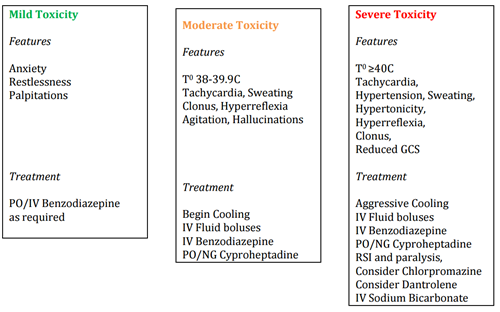 *There is no evidence to support the use of Dantrolene effectivement in serotonin toxic patients.

Investigations: (Dictated to by presentation)

Role of urine toxicology - Helpful for surveillance of agents only. Does not change management as most NPS NOT detected.

* There is no evidence to support the use of Dantrolene effectiveness in serotonin toxic patients.