Forced air warming blankets are a commonly used medical device in the perioperative setting and within Paediatric Intensive Care and High Dependency units They are used as a means of preventing inadvertent hypothermia during prolonged operative procedures, and to help establish and maintain normothermia in acutely and critically ill infants and children.

This nursing procedural guideline is intended as a resource for nursing staff in the Paediatric Critical Care Unit at the Royal Hospital for Children (Glasgow) involved in caring for children that require body temperature management and forced air warming to prevent hypothermia. The guideline has been constructed after a literature search and review of sourced textbooks, manufacturer guidelines and recommendations, Medline and CINHAL, and external nurse expert peer review and opinion. See also recommendations and further information at end of this guideline.

This nursing procedural guideline is intended to be followed by nurses involved in caring for the highly dependent or critically ill infant or child requiring body temperature management and prevention of hypothermia using forced air warming within the Paediatric Critical Care Unit at RHC (Glasgow).

All nursing staff involved in the management of body temperature and use of forced air warming in the Paediatric Critical Care Unit should be familiar with this nursing procedural guideline.

Forced air-warming systems have been in use for a number of years as a means of preventing and treating hypothermia and to provide warmth to cold or shivering patients. Forced-air warming systems such as the Bair Hugger® 775 are routinely used in the perioperative situation, emergency rooms or in critical care units, where hypothermia can complicate treatment and recovery by increasing oxygen demand due to shivering and affect patient coagulation.

The Bair Hugger® 775 may be used in the Paediatric Critical Care Unit for critically ill infants or children who have conditions that may result in an increased risk of hypothermia.

Some studies suggest that forced-air warming, if used correctly, can increase the patient’s core temperature more quickly than other active warming methods, help reduce metabolic energy production and even decrease the requirement for specific cardiovascular drugs.

However, there are limitations in the use of forced-air warming systems such as the Bair Hugger® 775.

The system should not be used over trans-dermal medications as the heat and subsequent vasodilatation of surface blood vessels may result in increased drug uptake.

The warming system should never be used if the infant or child is on intra-aortic balloon pump therapy as thermal injury may occur if heat is applied to ischaemic limbs.

Some studies have suggested that use of forced air warming devices may increase the risk of colonisation with potentially pathogenic organisms. However, other studies have found that there was no increase in bacterial counts. 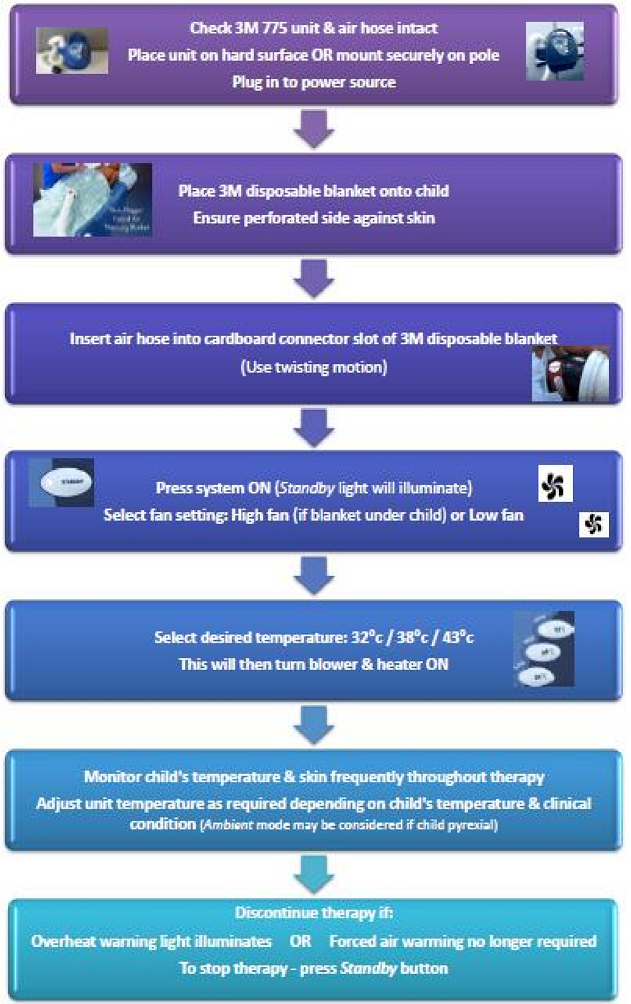