This guideline applies to all patients in Ward 1D, Paediatric Intensive Care Unit (PICU) within the Royal Hospital for Children in Glasgow who require enteral nutrition.

All healthcare professionals in PICU involved in the provision of nutrition should be familiar with this guideline.

Optimal provision of nutrition support and accurate assessment of energy expenditure should form an integral component of paediatric critical care (Mehta et al, 2009a). Nutritional status has a profound effect on the metabolic response to injury and can impact significantly on patient outcome (Mitchell et al, 1994) including length of ventilated days and overall length of PICU stay (Larsen et al, 2008). The goal of nutrition support in the critical care setting aims to augment the short term benefits of the paediatric stress response while minimising the long term harmful consequences associated with undernutrition.

It is widely accepted that enteral nutrition is the preferred method of feeding due to its physiological advantages of maintaining gut integrity and reducing infectious complications compared with parenteral nutrition. There are numerous studies which suggest that early implementation of nutritional support (within 24hrs) is associated with improved clinical outcomes, shorter length of stay, decreased infection rates and enhanced immune function (Petrillo-Albarnano et al 2006). This supports the theory that systematic initiation of enteral nutrition may improve patient outcomes in critical illness.

The lack of controlled research and clinical trials in critically ill children has resulted in an absence of widely accepted evidence based guidelines for optimal nutritional management in this group (Van der Kuip et al, 2004). However many UK PICU’s have implemented local guidelines for introducing and establishing enteral nutrition in their critically ill populations. It has been reported that this has resulted in more rapid initiation of enteral feeding, shortened the time taken to reach nutritional goals and improved the tolerance of enteral feeding (Gentles et al. 2014, Petrillo—Albarnano et al, 2006 and Briassoulis et al, 2001).

Measurement of gastric residual volumes (GRVs) is used routinely to assess enteral feed tolerance in both adult and paediatric critical care units.  Elevated GRVs are associated with sedation and catecholamine use (Mentec et al, 2001) and in paediatric patients are often attributed to gastroparesis. There is wide debate over the use of measuring GRVs to assess feed tolerance. Although McClave et al (2005) state that GRVs  are inherently flawed as they have yet to be validated, current opinion also suggests that a GRV > 5ml/kg can be considered to be an indicator of poor feed tolerance and delayed gastric emptying (Cobb et al, 2004 and Horn et al, 2004).

A local guideline addressing both the introduction and advancement of enteral feed as well as the measurement of GRVs should improve nutritional delivery in PICU.

Following cardiopulmonary bypass Malagon et al (2005) identified that gut permeability is increased and damage to the intestinal mucosa is sustained, this once again leads to increased concern regarding the introduction and advancement of enteral nutrition in such a fragile patient group due increased concern of necrotising enterocolitis (NEC).  Similarly, increased gut mucosal permeability leading to compromised intestinal integrity has been found in patients undergoing veno-arterial extracorporeal membrane oxygenation (ECMO), leading to bacterial translocation and sepsis (Kurundkar et al 2010; Piena et al, 1998).  Introducing enteral nutrition in patients undergoing veno-venous ECMO has been reported to be safe in the adult population (Scott et al, 2004) and the use of enteral feeding in neonates on both VV and VA ECMO is advocated, however, the rate at which enteral feed should be advanced has yet to be examined (Piena et al, 1998, Pettignano et al, 1998 and Hanekamp et al, 2005).

A study in stable preterm neonates found that splanchnic oxygenation increases following bolus gastric feeding (Dave et al, 2009), however, in patients at risk of mesenteric ischaemia this increased oxygenation demand may further increase the risk of NEC and warrants further research.  It could be argued that continuous feeding may be more appropriate than bolus, thereby reducing the demand on mesenteric oxygen consumption.

The introduction of feeding algorithms in patients with HLHS have been shown to enhance nutritional care and patient outcome (Castillo et al 2010; Braudis et al, 2009) and the introduction of such guidelines for patients identified as ‘High Risk Abdomen’ may also achieve similar improvements in patient morbidity and mortality.

PICU guideline for the introduction of enteral nutrition - gastric feeding 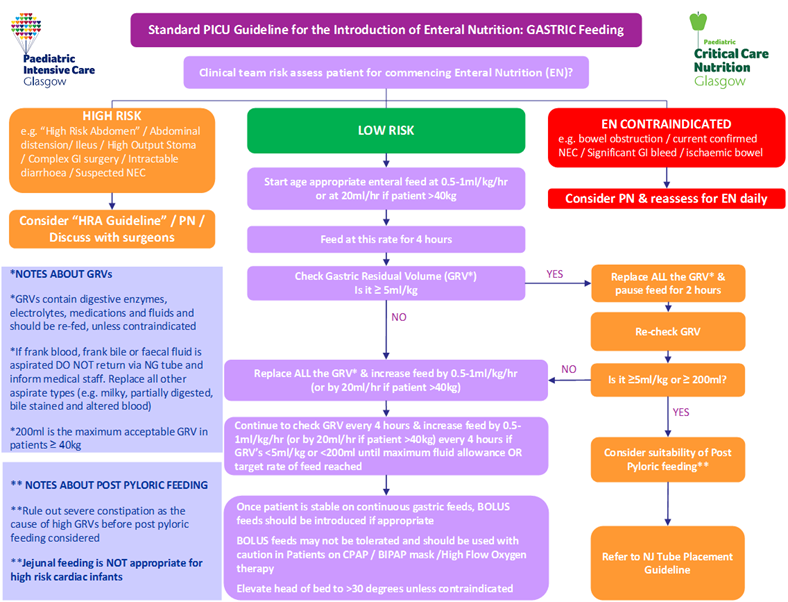 PICU guideline for the introduction of enteral nutrition - jejunal feeding

PICU guideline for the nutritional management of 'high risk abdomen' 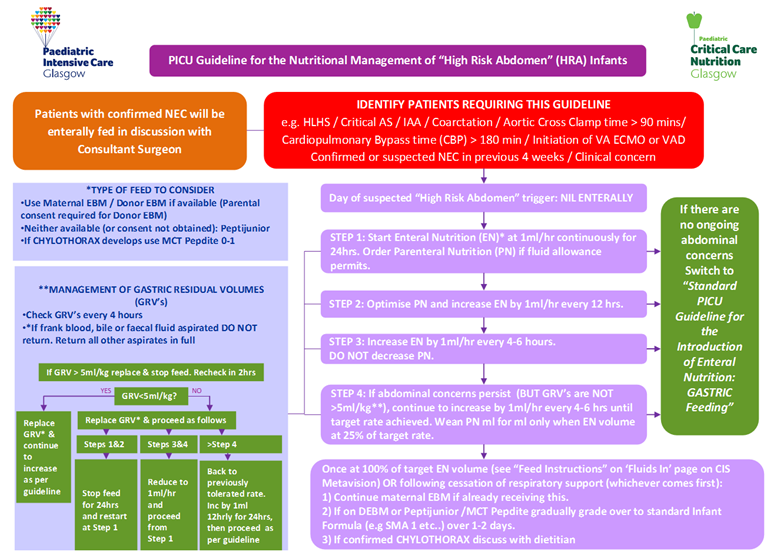 Fasting guidance for procedures on PICU patients in PICU or Theatre 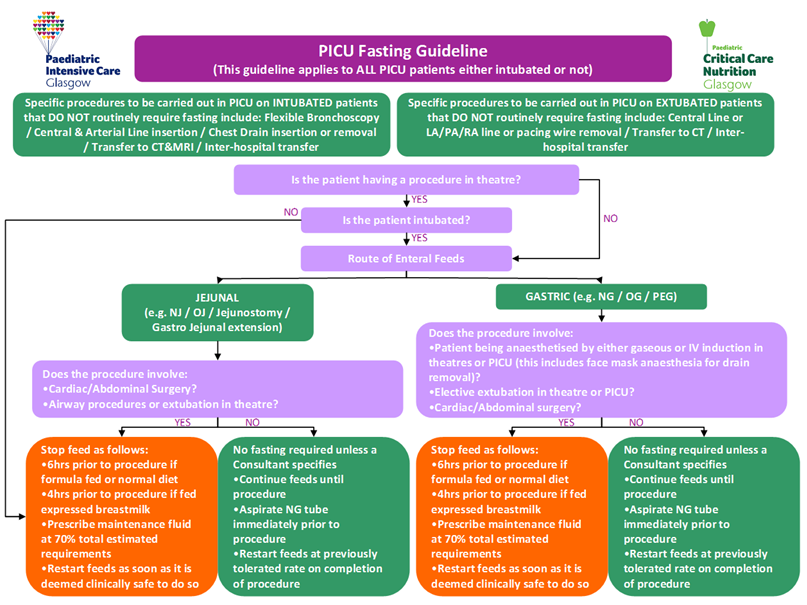 The following tables are for use in conjunction with PICU Guidelines for Introducing & Establishing Enteral Nutrition (Gastric and Jejunal). Table 1 details the initiation and advancement rates of enteral feeds. Tables 2A-C details the recommended target daily volume of enteral feed to meet nutritional requirements within given age ranges.

By using the below initiation and advancement rates patients will meet their basal metabolic rate (BMR) within 2 days of starting enteral nutrition (if fluid balance and gastrointestinal tolerance allows the increase to goal volumes detailed in Tables 2A-C).

The below feed target volumes (Tables 2(a)-2(c)) are calculated using the Schofield Predictive Formula for calculating resting energy expenditure (using median weight from the UK-WHO growth charts ages 0-4 and the UK 1990 reference for children aged >4 years), and the Scientific Advisory Committee on Nutrition (SACN), 2011 in addition to the Department of Health guidelines for EAR, 1991.

Calculations for target daily volumes are made using median weight from the UK-WHO growth charts ages 0-4 and the UK 1990 reference for children aged >4 years.  Where EAR using the SACN, 2011 recommendations and the Department of Health guidelines for EAR, 1991 differed by >20% (e.g. age group 7-12 months), a mean of the two values is used to calculate target rates for EAR.

When initiating enteral feeds in PICU use Table 3 to guide you through feed choice.